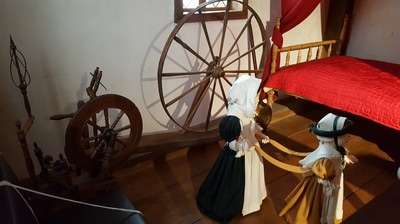 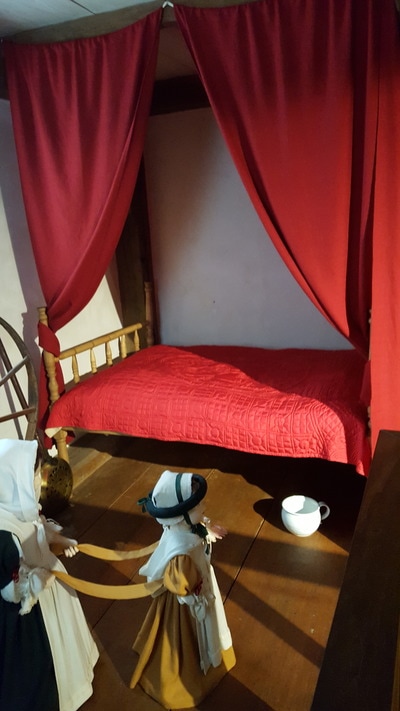 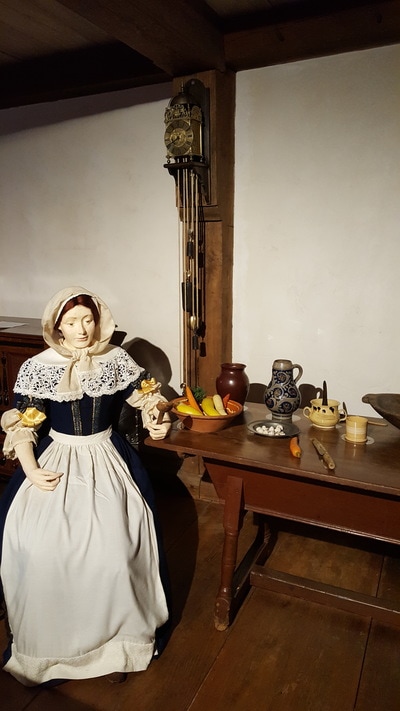 Click on any image above for full-size view.
The Wisconsin Room is a period room in NSDAR Memorial Continental Hall, the headquarters in Washington, D.C. The Wisconsin Room and the items within were gifted to NSDAR  by WSDAR in 1923 to present, and is managed by the NSDAR Museum staff. Museum staff often make decisions regarding how a room is arranged and whether items are to be added or deaccessioned.  The immediate past Honorary Wisconsin State Regent serves as the state chair for the Wisconsin Room.


The Wisconsin Room represents a “hall,” or multi-purpose living space, in a New England house between 1680 and 1720.  Throughout the day, the hall was used as a kitchen, dining room, sitting room, or bedroom.  Activities were often centered around the fireplace.  The fireplace was needed for heat during the winter as well as for light, cooking, and domestic chores year-round.  A number of specialized furnishings, like the carved chest, the English Lantern Clock, the silk wholecloth bed covering, and wool bed curtains suggest a well-to-do family of this period.  However, the two spinning wheels and the cooking utensils indicate a merchant, skilled craftsman, a farmer or a trader  -  a middle class family.

On a visit to the Wisconsin Room one steps back to the earliest period of American history represented in the DAR Museum.  In fact, the Wisconsin Room is the only period room representing this early time frame in Washington D.C.   Early homes had casement windows with diamond-shaped glass panes set in lead frames, as is featured in this room.  The bedstead is a handmade copy of the only American 17th  century bedstead known to exist.  The original bedstead is on display at the Museum of Fine Arts, Boston (MFA).  The MFA allowed us to make a copy for the Wisconsin Room.  A craftsmen from New England who specializes in making 17th century American furniture by hand was commissioned to make this piece.

The curtains on the bedstead are made of red wool.  The fabric was handwoven and dyed in Vermont by Kate Smith of the Eaton Hill Textile Works; the bed curtains and bedstead were gifted in 2015 by the Wisconsin Daughters.  The curtains are much like a set seen in historic Deerfield, Massachusetts.  Textiles were one of the most expensive commodities owned by early colonists.  A wealthy family had more opportunity to purchase ready-made goods.

The English lantern clock is the oldest clock in the DAR Museum's collection; it dates from 1690 to 1715, coinciding with the reign of William and Mary of Orange, who were Dutch. The Dutch tulip motif appears in the middle of the dial and on the central fret above the face, flanked by the coat of arms of England.  Lantern clocks were the first readily available domestic clocks in England.  The clock was a gift to the room from Dr. Marilyn R. Baxter, Wisconsin Honorary State Regent.

The oak and pine "sunflower" chest from Hartford, Connecticut dates from 1680.  Only a small number are known to exist.  The split spindles and applied ornaments, or bosses, are stained black to simulate ebony.  Sunflowers and tulip panels are a feature of the Connecticut Valley chest.

The English bonnet cradle was created of oak in the 1700s.  It  has rockers and high sides terminating in finial posts to prevent the baby from falling out and to protect the infant from cool/cold breezes.

A lobbed, tin-glazed earthenware charger was presented to the Wisconsin Room by the Roddis Foundation in honor of the  President General,  Sara Roddis Jones, the only President General from Wisconsin.  It commemorates King William III of England when he was crowned in 1687 after Queen Mary, his wife, died.  His picture and initials, K in blue, decorate the center surrounded by tulip and vine decorations in bright green and yellow.  This style is known as Baroque.  The charger/plate/bowl is now on permanent display in the DAR Museum.  It has been determined to be the only one of its kind in the NSDAR Collection and is priceless.

You may visit the Wisconsin Period Room with a virtual tour, a gift from WSDAR.  Go tohttp://dar.org/omni/virtualtours/museum/index.html.  Click on Wisconsin and BE PATIENT – it takes time to load.